We started with 32 nations and after 48 games we are now left with 16. The Group Stage was one for the ages as we only had one 0-0 draw, a few last minute equalizers and winners, every team scoring twice for the first time ever, stunning goals left and right, upsets galore and some surprising group results. We now transition into the part of the tournament where boys become separated from the men and we start to see who the true contenders are.

I finished the Group Stage with 21 wins, 20 losses and 7 pushes which isn’t a bad record considering I only lost on 42% of the matches. To add to that, I predicted 14 of the 16 teams to make it into the Round of 16 and nailed 5 of the 8 groups’ top two in order. I also correctly predicted 7 out of my 10 ‘win group’ or ‘advance to Round of 16’ bets I proposed in my previews.

Alright that’s enough tooting my horn for one blog. Let’s get into the bracket which has now developed, albeit in lopsided fashion.

Outside of Japan and Russia, every team in this bracket has the opportunity to make a run but coming out of the left side of that bracket will take a lot of work. Something to point out is the match on Saturday between France and Argentina, giving the winner a decent path to the Semifinal. Also if Argentina and Portugal win their R16 matches, Ronaldo and Messi will square off in a World Cup Quarterfinal. That would surely be one of the biggest soccer matches of all time and legacies would be on the line.

But before we get to that let’s go into the matches that closed out the Group Stage in my recap.

South Korea (2) Germany (0). No, this is not a drill. The Germans crash out in embarrassing fashion, losing to the South Koreans 2-0 in one of the more shocking upsets in World Cup history. That makes three straight champions who haven’t make it out of the Group Stage the WC after their championship and 4 of the last 5. Cursed.
Mexico (0) Sweden (3). The Mexicans completely capitulated but with the saving grace of the South Koreans, they still advance to the Round of 16.
Serbia (0) Brazil (2). Serbia’s tournament ends in a frustrating loss to the Brazilians. The boys in canary yellow are starting to wake up.
Switzerland (2) Costa Rica (2). In one of the more shocking results of the end of the Group Stage, Switzerland drew to the Costa Ricans but still go through off of Serbia’s loss.
Japan (0) Poland (1). Poland closed out their tournament in solid fashion.
Senegal (0) Colombia (1). In a bizarre turn of events, Senegal get knocked out by fair play points due to all tiebreakers being even with Japan. Colombia now look like a beast you won’t want to face on the right side of the bracket.

Things to Watch out for in the Round of 16 and Knockout Rounds:

Betting-wise, things get quite interesting after the Group Stage. First off, all spread, over/under and moneyline bets are 90 minute bets unless otherwise stated. In the knockout stages games can go into extra time and penalties, making your bet null after the 90 minutes. So whatever I pick and whatever you bet is only for the 90 minutes of regulation and not anything after that.

France v Argentina – We start the Round of 16 with an absolute belter of a match. After Argentina’s late heroics on Tuesday they now have to turn around and face a France team that went undefeated in their group of Peru, Denmark and Australia. Don’t take their draw with Denmark into account too much as they sat 5-6 starters to rest legs and prevent yellow card accumulation. It’s also hard to jump on the Argentina bandwagon as they not only almost didn’t qualify, but they’ve yet to play a solid 90 minutes on all fronts all tournament. France are and have been the better team and they match up well against the Argentinians. Their central midfield led by Ngolo Kante can suffocate the creativity around Messi and Argentina’s defense will have serious trouble with Mbappe, Griezmann and whoever they start out of Dembele/Tolisso/Lemar. Adding to that, their depth gives them the ability to make changes during the match as well as provide the right lineup to cause Argentina problems. The match in most places rests as a pickem due to the quality of both teams’ players, France’s regression to their mean after a draw and the fact that Argentina are beginning to look a bit better (aka Messi waking up). But there are other places that have France as slight favorites, so it depends on where you shop the lines. (I also may change the pick depending on the fluctuation of the odds and if I can catch the lines changing before the match, FYI). I almost never bet against Messi, but it’s hard to fade the French here as they are just all around a better side, can defend Messi’s supporting cast and run wild against a very weak Argentinian defense. Since it is a 90-minute bet with a great possibility of a push, I like France here as it’s tough to see Argentina winning outright in those 90 minutes. France (Pick -140).

Uruguay v Portugal – Cristiano Ronaldo will lead his Portugal squad against the Uruguayans who were the only team to not let up a goal in the Group Stage and have one of the better one-two punches up top with Suarez and Cavani. They were also one of three teams to gain all 9 points from their Group Stage matches. Yes, they had one of the weaker groups in recent memory but that doesn’t discredit everything they accomplished in their group. In fact, I think this Uruguayan team is built to stop Portugal. Their back line and outside backs can handle the space Ronaldo will try to get and they can finish at will up top. This is a Portugal team that has Ronaldo who can also score at will as well, but if you can suffocate him and exploit the fact that they have only had one match where they had a better expected goals, Uruguay can be successful. We have another pickem here, providing value in betting around that 90-minute draw and I think Uruguay has the better chance at winning in regulation. Expect the Uruguayans to frustrate Ronaldo early and pressure Portugal hard, allowing Suarez and Cavani to break forward. Uruguay (Pick -110). 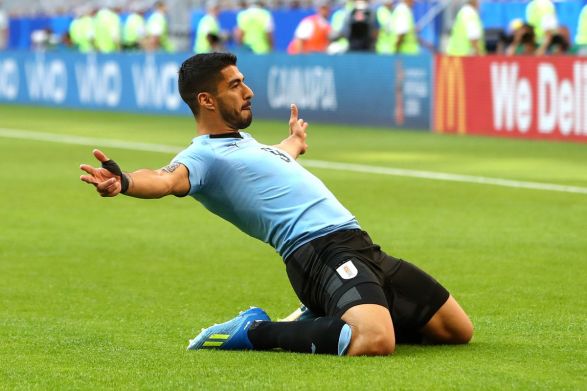 Spain v Russia -The most lopsided and on paper possibly the most uninteresting match of the knockout rounds so far includes Spain and Russia. The Spanish have not been playing up to their standards so far in the tournament but this an opportunity to expose Russia and give themselves some confidence moving forward in this tournament. This is going to be the perfect match to wake up hungover on Sunday and not make it feel like you have to be fully invested. Wow Nico, you sound like this match is already over! Why? Because it basically is. I don’t care how good or bad the Spanish have looked so far, the Russians have only played one decent opponent in this tournament so far and they got spanked 3-0. In that match they let Suarez and Cavani run wild even before the red card and they can’t afford a single Spanish player to do that. Spain has almost twice the quality top to bottom as Uruguay and Russia still looked like a youth team against them. As an example of their performance against quality sides like Spain, Russia lost 3-1 to France and 3-0 to Brazil in friendlies before the tournament. Forget home field advantage and forget the wins against the Saudis and Egyptians as this is where Spain will begin to wake up and where Russia’s tournament ends. Even with the possibility of a classic 1-0 Spanish masterclass push, throw your kids college fund on this one. Spain (-1).

Croatia v Denmark – This one may be a peach to watch as both teams have similar styles of play and each nation has a star midfielder or two who can make a massive impact at any moment. After Croatia’s dominant Group Stage showing they are now classified as one of the favorites of the tournament as they went 3-0-0 with the second best goal differential in the Group Stage. You can’t deny the brilliance of midfielders Modric and Rakitic especially in their 3-0 rout to Argentina, where they showed the world that they can run with anyone in this tournament. But Croatia has the most yellow cards accumulated of any team who advanced to the knockout stage, a big wrinkle in what has been an almost perfect tournament for them. This may make players play timidly and could throw off the pressure that they would apply to Denmark. It may not end up making a huge impact on the match but it could alter substitution strategy and lineup selection. This Danish side actually went undefeated in Group C with 1 win and 2 draws, including one to France on the last matchday. Most importantly they have Christian Eriksen, who has either scored or assisted on all of the goals scored in this tournament for them. But my biggest concern is if they can produce the goals necessary to get results in the knockout stage which are usually very tight and low-scoring affairs. They’ve yet to score more than one goal in a match which is worrying compared to Croatia’s average of 2.3 per match. I like Croatia to keep riding the momentum and get the points here as I think their combination of fluid midfield play and rock solid defense will prevail in regulation here. Croatia (-0.5).

I hope everyone enjoys their Friday off of footy and can indulge in some dope matches on Saturday and Sunday as we enter the knockout stage.

I also wanted to thank everyone who has been reading these last few weeks. The blog has begun to really take off and I’m very thankful to everyone who follows and spreads the word to friends, family and coworkers. Keep it up!