Nothing better than a Cup Final sponsored by an energy drink that’s named after a swamp-type domestic water buffalo native to the Philippines. That’ll get the juices flowing folks. But that doesn’t mean we can’t get excited about a reason to drink on a Sunday morning for a Cup Final! As a brief overview, the English Football Association has two domestic tournaments that involve the lower divisions; the FA Cup and the Carabao Cup. The FA Cup has reigned supreme for almost 150 years as the premier club tournament, while the Carabao Cup is a sponsored tournament that helps the FA cash more checks. Let’s get into the details!

Arsenal:
Arsenal is a club that is currently going through some of its worst struggles in the last two decades, as it now sits in 6th place and far off the top 4. To add to that they barely squeaked by in the Europa League against Östersund and also recently lost in the FA Cup. This is literally the only thing they have to play for this season and it could, (emphasize the word ‘could’), bring Wenger’s tyrannous reign to an end.

Recent signings have brought hope that the squad can play top football but the recent results have been inconsistent and fans have never been more pessimistic. Luckily, Wenger and Arsenal have been superb at winning domestic cup competitions, winning 6 FA Cups in the last 16 years. Never count out Wenger’s odd affection towards domestic trophies!

Form (L5): 2-3
Injuries: Aaron Ramsey (Questionable) Alexandre Lacazette (Out)
Keys to the Match: 1. Don’t let De Bruyne create inside the final third, more specifically around the corner of the box. 2. Get Aubamayeng involved. He needs to be coming back and receiving the ball on he build up to help create and most importantly get in behind the defense on the break. 3. Do not concede early. You can’t let City get on the front foot early and start to demand the match.

Manchester City:
Man City have already run away with the Premier League title and sit in a great position to advance to the Champions League Quarterfinal. Everything was going according to plan until they lost to Wigan in the FA Cup on Monday, giving us one of the bigger upsets in European Football in the last few years. They’ve only lost 3 competitive matches all year, and responded to the other two with two big wins. But with injuries becoming more of an issue for City and coming off of a bad loss to a 3rd division team, questions are starting to be asked if they can win the amount of trophies that are expected of them. A win here can capture two domestic trophies and give them more time to focus on winning the ultimate prize, the Champions League. 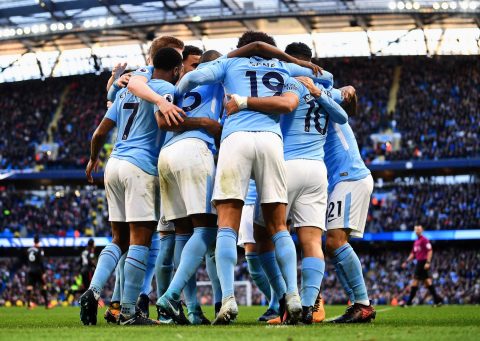 Form (L5): 3-1-1
Injuries: Gabriel Jesus (Probable), Raheem Sterling (Doubtful)
Keys to the Match: 1. Get control early and maintain possession. As shown in their Premier League matchup in November, Arsenal can’t contain City for 90 minutes if they have over 60% possession. 2. Give the ball to De Bruyne with space in the final third. The Premier League assists leader and probably Player of the Year has been utterly deadly in the final third providing 7 goals and 14 assists in the league in 27 matches. 3. Don’t let Arsenal and Aubameyang beat you on the break. If City lose possession and get caught on the break, they need to make sure Ozil/Ramsey don’t find Aubameyang getting in behind the defense.

Pick:
I think this match will start with a lot of energy due to the implications of what this title could mean for both clubs. Arsenal only have one thing to play for and City need something other than the League to cement themselves as one of the better teams in the Premier League era. It will start with lots of chances in the first 15/20 minutes for both sides and will make way to City slowing the tempo down and controlling the last portion of the first half. Once they find control I think they will score before half to make it 1-0, forcing Arsenal to play more attacking in the second half. Pushes from Arsenal in the second half will make City nervous but they will find a goal on the break from Leroy Sane to seal it for City, 2-0. Manchester City (-0.5).