It’s been almost two weeks since I last threw out a blog, so let me give you a quick recap on the world of footy.

Phillipe Coutinho has been sold from Liverpool to Barcelona for a mere $170 Million, just 5 years after he was acquired for $10 Million. Safe to say that’s a hell of a return on investment for Liverpool, who will most likely (hopefully, at least for Liverpool fans) spend the money towards fixing their goalie situation. To be honest I think Coutinho is somewhat replaceable with what Liverpool has in attack, and $170 Million is A LOT of money. For Barca, well, they’re even better than they were before even after selling Neymar this summer. They will now have a fully healthy squad once Coutinho gets back in the lineup, with Dembele returning from injury. Smells like a Champions League campaign, since they’ve basically locked up the league. 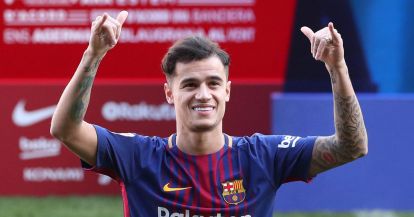 Yeeeaaahhhh soooo, Arsenal are in deep deep doodoo. After crashing out of the FA Cup, realistically the only thing they have to play for this season is getting into the top 4, which doesn’t even look likely. To add to the pain, they seem on the verge of selling Alexis Sanchez to Manchester City for about 1/4 his value because his contract will be up after the year. That means they have no leverage, as they either sell him now for a low fee or let him walk for free in the summer. #WengerOut.

Real Madrid have now won just 1 of their last 4 matches and sit in 4th place 16 points behind leaders and rivals Barcelona. Ronaldo is starting to slow, with only 4 goals in 13 La Liga matches this season and they aren’t controlling matches like they did all of last season. It goes to show that success doesn’t always translate year to year, showing just how magical that run Madrid had for the last 2 years was.

Now that we have that out of the way we can get started on the real business; looking ahead to this weekend’s matches which includes a huge Liverpool v. Manchester City match on Sunday. Let’s grip it and rip it…

Leicester City @ Chelsea (-1.5) – I absolutely hate picking this match, but will thoroughly enjoy watching it. In one of the best matches of the weekend we have two attacking sides who love scoring goals, with little defensive discipline. When it comes down to a match like that I always see who has the better keeper, with Chelsea getting the edge with Courtois. Chelsea have won by less than two goals only once in their last 4 matches against Leicester, so I wouldn’t be surprised if they take control here either.

Swansea City @ Newcastle United (-0.5) – Newcastle may be in 13th place, but the bottom half of the table is separated by only 5 points. If they lose they technically have the opportunity to drop into 18th, making this a must win. Newcastle believs in ‘Everybody Eats’ as all of their forwards have goals this season. On the other side of the match, Swansea sit in dead last with 16 points and need more than 3 points to climb out of the drop zone. Thus, making it a must-win for both clubs. But right now Swansea is complete trash and Newcastle have won 3 of their last 5, with only 1 loss.

West Ham @ Huddersfield (Pick -115) – West Ham are not only dealing with injuries, but have won 1 match away from home all season long. Huddersfield meanwhile have quietly been pretty good at home with their only two home losses coming against City and Tottenham, and even sneaking a home win against United. German-American manager David Wagner has his boys playing good footy this season as they have been the best promoted side.

Southampton @ Watford (Pick -120) – Southampton are one of those teams in that volatile zone in the bottom half of the table, only surviving due to their goal differential. Watford meanwhile sit atop that zone, in 10th place. Watford won the first match in September at Southampton, but since then have been super inconsistent. A good FA cup win and some rest for their injuries should do the trick and bring them back to their old form.

Brighton (+0.5) @ West Brom – Again, another match inside this zone where there aren’t many points separating almost 10 clubs. Brighton won their home side of the head to head earlier in the year quite comfortably, and West Brom haven’t won in the league in their last 20 matches (there have been 22 matches in the league). Brighton seem a strong pick here with the points.

Burnley (+0.5) @ Crystal Palace – Low key, low low key, this may be one of the matches of the week. Palace have been on a TEAR since Roy Hodgson took the wheel as manager, climbing from the bowels of the table with the worst start in league history to only 1 loss in their last 11. Burnley meanwhile, have been the darlings of the league this year sitting in 7th and boasting the best against the spread numbers by a mile in the league. They’re win/push rate is at a tasty 82% this season, while also boasting the best win % against the spread with 59%.

Everton @ Tottenham (-1.5) – In the ‘Primetime’ Saturday match we find ourselves with what would usually be a great match, but this year has an interesting tinge to it. Everton have been a shell of themselves, and after selling Ross Barkley to Chelsea there seems to be less and less confidence in the squad. These teams may be only 4 spots away from each other in the table, but they are separated by 14 points. Everton haven’t won in their last 6 matches and are coming off of playing Man U and Liverpool successively with little rest in between, a tough task for any squad. Spurs meanwhile are beginning to play some really nice football with 1 loss in their last 6 league matches, that loss coming at Manchester City. Expect Wembley to be rocking as the tide in North London begins to change.

Arsenal @ Bournemouth (+0.5) – Shockingly enough, Bournemouth have been the second best team against the spread this season. Arsenal find themselves in serious trouble, with rumors clouding their players and their manager and they don’t seem to be finding good form. Although they drew at Chelsea on Wednesday, they’ve only won 1 of their last 6 in all competitions. I can’t believe I’m doing this but Bournemouth at home with points seems like the safe pick here.

Manchester City (Pick -140) @ Liverpool – (Pick -140 as of 9:00am on 1/12) The match of the weekend comes at 11:00am before the 1:00pm NFL kickoff, which may be the best 1-2 punch this season. To be honest as a City fan, this is the first match I’ve truly been worried about losing. City bring in their undefeated record to Anfield, where Liverpool haven’t lost at home to City in their last 14 league matches. Liverpool haven’t lost a match in all competitions since October 22nd and have won their last 4. They’ve been playing amazing football and although Coutinho is gone, he hasn’t played much for them all season due to ‘injuries’. But with the way Manchester City have been playing, it takes more than this Liverpool team to pick against them. Manchester City currently lead the league in shots on target per match, accurate passes per match, possession and goals per match. Kevin De Bruyne dares you to pick against them…

Stoke City @ Manchester United (-2) – It took Stoke long enough to fire Mark Hughes, as they have been arguably one of the worst teams in England this year. Although their last 3 matchups have ended in draws, Manchester United will feel comfortable at home against a Stoke side who lost by 5 at Chelsesa and 4 at Tottenham all in the last month. They won’t have a manager which rarely bodes well for a team who is in horrible form and surely to be relegated. Until they find a manager and figure it out, the dumpster fire will continue for Stoke.

That is all for this weekend’s preview, expect Kulla to come out with an Arsenal transfer rant blog at some point in the near future (if he’s man enough). Tough times out here for an Arsenal fan. Don’t forget to tell any of your loser soccer friends about the blog, and to follow us on Twitter. There may be something new coming as a review for the matches over the weekend so keep an eye out for that (*eye emojis*). Until then…