*Jim Nantz Voice*, ‘Hello friends’. We have an awesome group of games this weekend in the Premier League with only 1 game having a spread of more than 1 goal. This my friends, is rare. Let’s check in on how yer boi is doing this season in his 194 picks so far…

Headed into the week this is what the table looks like: 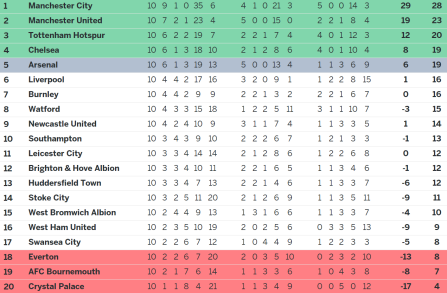 Let’s get this party started…

The teams in first and second place in the Bundesliga square off in one of the better rivalries in world soccer. Dortmund come into this one in some serious trouble, basically being eliminated in the Champions League and currently not in form. Luckily for them, they play in one of the best fortresses in sports, yes in sports. The Dortmund ‘Yellow Wall’ is one of the most spectacular sights in the world and it will definitely trouble a Bayern side who thinks they can take advantage of a down-trodden Dortmund side. It’s very rare for this team not to be favored in its home fortress. Pulisic will score a goal and Dortmund will take the 3 points. Dortmund (+½).

Arsenal @ Manchester City (CAN I KICK IT CUP)

CAN I KICK IT CUP vol. 1!!! Kulla and I will be facing off in the ultimate bragging rights match, to see who will take down the cross-blog rival. Two different teams right now; one with an identity as arguably the hottest team in the world and another still looking to find their identity. Man City are coming in off of resting some of their star players last weekend before going full-throttle in their win at Napoli this weekend, while Arsenal rested their players on Thursday in their meaningless Europa League game as they have already qualified. But here is something to take into account; City have only won 1 of their last 9 against the Gunners in all competitions, with their win coming in this exact fixture last season. Hey Kulla, get fooked brother. Man City will run all over Arsenal and will send a message to all teams in the Premier League that they will not falter this season in big matches, especially at home. Manchester City (-1). (Refer to Kulla’s preview HERE).

ANOTHER freaking awesome game this weekend as United travel to London to take on Ellis Schaefer’s new favorite team Chelsea. This game is a Pick, which surprised me considering the home team hasn’t lost in this matchup in 4 years and Chelsea have only lost 1 of their last 15 home Premier League games to Manchester United. Added to that, Manchester United have lost more Premier League games (17) and conceded more Premier League goals (66) against Chelsea than they have against any other team. United have also only won 1 of their last 3 away matches in the league. I like Chelsea here to win, and at worst push with a tie. Chelsea (Pick -120).

That’s all for my choices for this weekend. It’s going to be an amazing few days of games in the Premier League, Bundesliga and La Liga. If you want a preview of the CAN I KICK IT CUP, check out Kulla’s awesome preview here where he has a bold prediction and some great analysis setting you up for the match. Enjoy!!